A stitch in time builds lives

By Helen Beringen. This story appears courtesy of The Lutheran magazine.

Imagine a life where you have no say, no voice and no choice. Now imagine being housebound in a foreign land, where people speak a language you don’t understand and lead a way of life very different from your own.

Enter a kindly soul with a community bus who can take you from your doorstep to a safe place, where you are treated with dignity, where you make new friends and learn new skills.

Welcome to the Lutheran Community Sewing Group in Adelaide’s northern suburbs, where a volunteer team supports and teaches migrant women not only how to sew, but how to be valued, loved and to make sense of a new and alien world.

For almost 20 years coordinator Helen Semmler, 68, has run the group with a band of amazing helpers, from teachers to bus drivers, crèche helpers and sandwich makers. The past 16 of those years have been based at Albert Park Lutheran Church hall, where weekly student numbers average 25, with almost as many volunteers from 10 different Lutheran congregations, as well as other Christians, non-Christians, Sikhs and Muslims.

‘The most important thing we do in our group is equip the women with the skills and the confidence to achieve things, whether sewing projects or other goals. They often come from cultures which don’t value girls and women, so we applaud and celebrate every little pin cushion and every garment they make. This boosts their self-confidence and helps them to tackle other projects, such as driving.’

These are massive steps for women who have had no say in their lives previously. And relationships built over needles and thread grow both ways.

‘We have learnt more from our women than we’ve taught them – more about patience and love’, Helen says. ‘I am also sure that we show the love of Christ to them in a way which words could not always convey.’

Many of the women have come from traumatic backgrounds. Some have little education, others are well-educated, but they do not speak English. So as well as learning how to sew, those who attend the group develop many other skills, even learning how to resolve differences and fix mistakes.

It takes negotiation and communication to find agreement in some things – especially when you have 12 teachers, each with a different way of putting in a zip, Helen says.

‘They watch us negotiate the best way to deal with a problem’, she says.

‘They have come from a background where often the only way to resolve conflict is with fighting. We show them a better way to resolve differences and conflict.

‘Secondly, one of the most important things we teach them is unpicking. It’s just as important as using a sewing machine. As in life, undoing a mistake is harder and far more tedious than the initial stitching up of the mistake. And it’s a very serious lesson worth teaching.’

The genesis of the group, which Helen calls ‘Our Beautiful Lutheran Sewing Group’, was her passion for sewing and love for helping. She and husband Ken had welcomed into their home a Sudanese widow, Monica, who had lived in Kenya’s Kakuma Refugee Camp, supported by Australian Lutheran World Service (ALWS) through its international field partner, Lutheran World Federation (LWF).

The Semmlers had met Monica when she’d asked for someone to drive her to a Lutheran church. Helen answered the call. Monica and her family became regular guests to Helen and Ken’s home for Sunday lunch, as Helen and Ken helped the new arrivals learn more about the Australian way of life.

‘I am a sewer, so when Monica came to our house and saw my sewing machines, she just stood there like she had been blitzed by lightning’, recalls Helen.

Helen not only agreed to teach Monica how to sew, but she soon began teaching Monica’s friend. And so, with the help of Noreen and Jim Klein, the group began.

It has blossomed through a range of grants and donations and a perpetual student waiting list. Donations have come from across South Australia and beyond.

In the past five years the group’s association with ALWS has gathered steam as the members have sewn up a fundraising storm.

If you’ve Walked my Way, you may even have been gifted one of the 830 colourful bags they’ve contributed to encourage participants in the event which supports children to go to school in refugee camps in east Africa.

While the sewing group has been in recess due to COVID-19 restrictions, a small group has begun sewing face masks for ALWS. They’ve already finished 500 masks, with another 400 in the pipeline.

ALWS is a great match for the group, with Helen and Ken’s decades-long relationship with the LCA’s overseas aid and development agency, LWF, and the former Lutheran World Service Club.

Ken, a former RAAF fighter pilot, served ALWS in Cambodia in 1992, Rwanda in 1994 to 1995 and Sumatra between 2005 and 2010, the latter in support of the post-tsunami recovery effort. He stressed the importance in the early years of ALWS of the input of former directors Brian Neldner, Sid Bartsch, Gary Simpson and Peter Schirmer.

‘What Helen and I have done is no big deal’, says Ken. ‘“For God so loved the world that he gave …”. In our own stumbling manner, can we do otherwise? Praise the Lord and press on.’

Helen Beringen is a Brisbane-based writer who is inspired by the many people who serve tirelessly and humbly in our community. By sharing stories of how God shines his light through his people, she hopes others are encouraged to explore how they can use their gifts to share his light in the world. 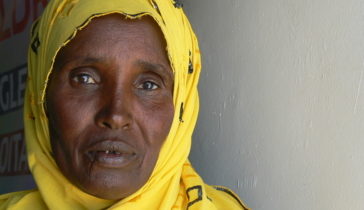 People forced to flee as refugees can often become separated from friends...