‘We had no victims!’

Dorlan and Natanael live with their children on Mentawai Island, Indonesia. It’s an area prone to natural disasters, which is why ALWS partner’s CDRM&CDS work closely with communities there to help prepare them for disasters. Here, they tell how the training you provide through ALWS is life-saving…

It was 10pm at night.  Because it was the rainy season all the family were sleeping in the house.

There was no sign.  We felt a small earthquake but we didn’t think anything else would follow, as it was just a small one so we did not worry.

Then I heard a big roar from the sea and I asked my husband to open the window to check the sea.

Suddenly, the water came rushing into the house.  It was at least a metre high.

We ran out of the house with the children.  Two of them could not walk so we had to carry them.

When that water came I felt panic and afraid.

Because it was raining it was difficult to carry the children and see where we were going.  I was afraid that the second bigger wave would come.

I was so thankful that CDRM&CDS had worked with us previously and helped us think about a safe place to go if a tsunami came to our village.

We ran through the dark and rain to that place on higher ground.  We had arrived at this safer place when the bigger second wave did come about 10 minutes later.

That second wave washed our whole house away – everything.

When we went back the next morning we saw that everything was gone – all our clothes, the children’s books, the pots, pans, stove, our rice and oil – it was all washed out to the sea.

All we had left was one thermos and one hatchet knife.

I was feeling so very sad.

I was thinking, ‘where shall we live, what shall we eat, where will the children go to school – we have no rice, not food….”

There were 16 households in our sub-village and we all made it to the safety point.

We only had one tent for all of us, so my family only stayed for one day – there was not enough cover for all of us.

Later that day we made our way to the nearest sub-village by walking and canoe.  It took us over two  hours.  We stayed in their school building and the people there gave us some cassava and bananas to eat.

After two or three days some help came from some agencies from Sikekap.  We got lots of noodles!

It was hard.  There were no latrines and no water taps.  We had to take water from the river but it was not good.

We had to stay two weeks at the school.

Because our own house was all gone, we needed to relocate to near here.  It was like a forest, so all the husbands and fathers worked hard each day cutting down the jungle while the women prepared the food and looked after the children.

We had some support from the church who gave us rice and eggs and pans and CDRM&CDS gave us food and clothes and a stove, oil and some benzyne for cooking.

It took over two weeks of hard work to clear this land. Each day there would be room for one more tent to be put up for another family.

We had to live in the tent for more than six months.  It was very hot in the tent at night and very cold later on.

It was hard, especially for the children.

The smoke would always be getting in their eyes when we were cooking and the ground was very muddy because of all the rain.

The water source dried up so we had to walk for 30 minutes to get water.

The children had lots of colds, influenza and diarrhea.

I felt sad and it was so difficult to take care of the children.

The sun was very hot and the rain was heavy falling.  Everything in the tent was crowded – pots, pans, clothes – everything!  It was frustrating.

Finally after 6 months we got a temporary house made of plywood.  It was 4m x 6m – one room for all our family!  This was supplied by the government.  If you wanted more room you had to build it yourself, so we tried to build on a small kitchen.

I felt a little happier to have this place to live in.  We lived for 2 years in this small temporary house.

For us the training given by CDRM&CDS was life saving!

They came to our old village in 2009 and taught us to have an evacuation place of safety and a route to get there.  They also set us up in teams like one team for shelter, one for the stretchers, one for water and so on.  They made us practice in drills.

If we didn’t know or have that training there would have been many victims in our sub-village, but we had no victims!

We say ‘thank you ‘ for that training because before we didn’t understand about Disaster Risk Reduction – this has saved our lives!

Before the Tsunami my husband’s livelihood was fishing and working in the coconut plantation to sell copra at the market.  Now that we lived more far away from our land he had to walk and canoe for much longer just to do his work.

This was not enough income for our family’s need so we are thankful for support from CDRM&CDS for assisting us to grow banana, and chilli.

This makes enough for us to feed our family.

In 2013 we have received from our government this house which has two rooms and is 6m X 6m.   Even though this is not at our old village, we now feel more settled as the house is more permanent and stronger.

Support from CDRM&CDS has also helped us and our capacity for farming.

We have had training for how to make food for feeding the pigs, how to plant the cacoa seeds, practical information about pesticides and organic fertilisers.

This training for our Farmer Group is so good.

For example, we did not know that we will get bigger and better fruit from the cacao tree if we prune them and plant the seeds further apart.  This means they get more sun and nourishment.

Each household was supported with 22 seedlings and training.

We use this extra income for buying eggs, milk, food for the children and for their schooling.

Our top priority is for the children’s schooling.

Sometimes to do this we as parents make the sacrifice to go without food.  We want them to go to senior high, but without cash money it is  hard.

In the future we hope that we can get more support from CDRM&CDS with livelihoods such as chickens, chilli growing and pigs.  It is still only small, but it will get better in the future.

We say to the people in Australia, thank you for your support – for helping CDRM&CDS to save our lives!” 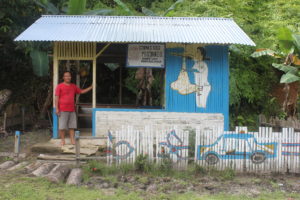 Welcome to a local village Health Post on Mentawai Island in Indonesia....