Side by side,every step of the way

When ALWS began 70 years ago, it was so our Lutheran family could walk alongside people in need. And that’s exactly what you still do today…

The end of World War 2 left Europe in ruins, and millions of people forced from their homes.

War-scarred people from Europe needed new places to live, and Australia needed new workers … and so began a 20 year exodus of more than 300,000 people to Bonegilla Migrant Centre near Albury.

The journey from Europe took weeks. Arriving at Port Melbourne, weary families then boarded a train for the rattly 8 hour journey to Bonegilla – just a few lights in a siding in a paddock. These people looking for a better life must have wondered where they’d ended up!

Yet our Lutheran family was there, welcoming them with open arms. Helping them find their feet. Listening to their worries and hopes for the future.

In 1947, many of the migrants arriving at the Bonegilla Migrant Centre were Lutherans, so the Lutheran pastor in Albury, Rev Dr Bruno Muetzelfeld, began visiting the Centre.

The living conditions at Bonegilla were basic – a room smaller than 3 x 2 metres, in a corrugated iron shed. No heating or cooling. Shower stalls were made of corrugated iron, which provided privacy – although the 30 centimetres gap at the bottom did nothing to stop the freezing cold air coming in there, while the scalding hot water came down from above! Food too was very different to what people knew from Europe.

In spite of the challenges, people were happy to be there, and thankful they were safe.

Often there were over 1000 Lutherans at Bonegilla at a time, so Pastor Muetzelfeld became the full-time chaplain. The Lutheran ministry to migrants expanded to place Lutheran pastors on the ships coming to Australia.

Then, once the government found migrants a more permanent home, the Lutheran team at Bonegilla let the local pastor know they were coming. This meant people had a Lutheran pastor supporting them all the way from their homeland to Bonegilla and then to their new home. Their faith may have been the only constant through this unsettling time. What an amazing comfort people our Lutheran family helped provide!

Serving to support and settle

In 1950, the newly-formed Lutheran World Federation decided a base was needed in Australia to help with the resettlement of refugees, and the Lutheran Church’s aid agency was born – Lutheran World Service-Australia (LWS-A).

More staff were needed. Dr Brian Neldner joined the team as a case-work assistant – and for the first 5 years of his work lived at Bonegilla in the same basic conditions as the newly-arrived people he supported. (Dr Neldner would go on to serve people through LWS for almost 40 years!)

Many of the migrants coming to Australia had left family at home. So support in these early years involved helping to bring loved ones to Australia by working with LWF offices in Europe. The Lutheran team also helped provide travel loans for family members.

LWS-A also supported some Lutheran churches with grants – they needed more room and services now that many migrant Lutherans were joining them.

In 1960, Pastor Muetzelfeld took on a senior position at the LWS headquarters in Geneva, Switzerland. Dr Neldner became the head of LWS-A. Lutheran Pastor Norman Sander was called to be chaplain at Bonegilla.

Laying foundations for a new life

When government started helping migrants to come to Australia, travel loans were no longer needed as much.

Because the repayment of loans had been so good, Dr Neldner was able to set up the Secondary Purpose Revolving Loan Fund to help with resettlement. A deposit for a home loan. A kick-start for a small business. Help to learn a trade… all ways ALWS supporters still help people build a new life today in places like Burundi, Cambodia and Indonesia.

In 1964, Dr Neldner moved to Tanzania to head up the new LWS program there, and Adelaide businessman, Sid Bartsch became the new director of LWS-A.

When the LCA was established in 1966 it was agreed that LWS-A would be its channel for overseas aid. Mr Bartsch promoted the emergency, refugee and development work of the Lutheran World Service around the globe – where our extended Lutheran family helps people in need regardless of race, colour or faith. He encouraged Australian Lutherans to support this work.

This is how the work through LWS-A moved from receiving help primarily from LWF to resettle refugees – to giving help to others!

From Bonegilla to the world

In 1971, the Australian Government decided to close Bonegilla, so the LWS-A office moved into Albury – historical (close to Bonegilla), financial (cheaper rent) and geographical (most meetings in Sydney or Canberra).

Now that help for migrants was not needed as much, the support increasingly shifted to aid and development around the world, with a focus on refugees. This continues today – LWF is the sixth largest partner of the United Nations High Commissioner for Refugees, and ALWS supports work in camps where nearly 1.5 million displaced people live!

Australians through LWS-A supported the worldwide work of LWF, and responses to disasters and emergencies, rather than to specific projects. This generosity and trust (that many supporters continue to this day) mean gifts can be used where needed most urgent. This increases impact and reduces costs.

In 1974, LWS-A received funds for the first time from the Australian Development Assistance Bureau (ADAB, then AIDAB, then AusAID, now DFAT).

Just when it seemed that support for migrants coming to Australia was no longer needed, things changed. Refugees from Vietnam, Cambodia and Laos plus Eastern Europeans and later even from Central America fled to Australia to find safety and security.

The Lutheran team helped them settle here with a loan for a rental bond and some basic household needs. This help was so successful the Australian Government supported it, together with LWS-A supporting nearly 2,000 families to begin their new life in Australia.

The Australian Government continues to trust ALWS to deliver community development work, with a rigorous process every 5 years to maintain accreditation.

The LCA and LWS in Geneva agreed the office should be called Australian Lutheran World service – ALWS. On 10 July 1989, the official document was signed by LCA President Lance Steicke and Dr Neldner – and ALWS became the aid and resettlement agency of the LCA.

The first director of the all new ALWS was architect Gary Simpson. He, and the all new ALWS Board, continued to make sure gifts from people like you were used efficiently and effectively to help people in countries like Mozambique, Cambodia and Nepal. The new ALWS also reached out to victims of war and disasters, in places like Rwanda, East Timor and Malawi.

It is very important that organisations responding to disasters coordinate their efforts to ensure resources are deployed quickly and effectively. That’s why Action by Churches Together (ACT alliance) was formed in 1995 – a group of churches and church-related organisations of different denominations working together with a common aim of helping people affected by emergencies.

Emergency work often requires going into inhospitable and even dangerous environments. Working together, and with trusted partners, ensures help from Australia and New Zealand can get where it’s needed, when it’s needed, as efficiently as possible.

In 1995, Peter Schirmer became Assistant Secretary with the job of creating resources for teachers. These resources continue today – classroom activities, videos, presentations and more – and are used by more than 70% of Lutheran schools across Australia.

During this time, Gary and Peter also visited the communities ALWS was helping overseas. This allowed them to learn more about the needs of the people, and show them that our Lutheran family’s care for them goes far beyond financial gifts.

After 10 years, Peter took over as Director of ALWS.

When the Boxing Day Tsunami struck in 2004, support for Indonesia began through their largest Lutheran Church, HKBP. This work grew to include other LWF churches in Indonesia, in partnership with International Mission and Lutheran Education Australia with generous support for many years from the LLL.

Our Lutheran community embraced the first-ever Gifts of Grace catalogue in 2008, sending goats, pigs and chickens around the world. Chey Mattner became Director in 2013, and in 2017, when the first Walk My Way was held, our ALWS family, supported by the Australian Government, gave more help than ever before – $8.6 million!

In 2018, Jamie Davies became Director, and in 2019, as part of the GRACE Project, ALWS supporters helped more than 40,000 refugee children go to school – matching the number of students in Lutheran schools in Australia!

In 2020, even COVID-19 couldn’t put a stop to things! Walk My Way became Walk YOUR Way – as people like you Walked, Wheeled, Woofed and even Toddled Your Way to help others.

It’s impossible to acknowledge every person since 1947 who made our church’s aid agency what it is today. However, this small taste of ALWS history shows how God has used the energy and passion and kindness of our extended Lutheran church family to bless the lives of thousands and thousands of people hurt by poverty, conflict and injustice.

Today, our church through ALWS works in 11 countries. Last year the ALWS family helped 297,498 people, with the same spirit of service as Pastor Bruno 70 years ago. Walking alongside people. Side by side, every step of the way.

Thanks be to God for the blessings brought through ALWS, as together we seek to bring love to life. 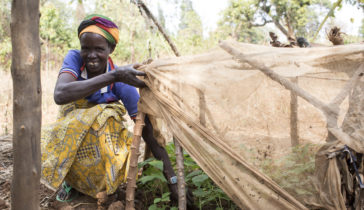 This Gift of Grace helps a family start their own home veggie...