Lamb chops and sliding in socks

I remember my mum having to put wet towels on our metal chairs as they were too hot to sit on in the summer!

We ate a lot of our meals outside in the summer – our backyard had a few trees.  We had a tiny BBQ outside in a fenced area made from a few bricks.  One time some Greek friends came over and cooked up some lamb chops that had been marinated in lemon juice, garlic and oregano and grilled them on the BBQ.  My parents were amazed to have lamb this way and said it tasted delicious!

I remember the possums on the roof, and we would have to warn any visitors staying to expect them to run around on the roof at about 2:00am.  I used to stand on the family piano and feed the possums through the air vent until it was blocked in!

In our backyard we had guinea pigs and a small canvas paddling pool which we enjoyed cooling off in during the hot summers.

I went to school at Bonegilla for the first 3 years but there was only a very small class for English speaking children, so then I went into the town.

I remember playing with lots of migrant children.  There was a sense of freedom to ride bikes, climb trees and play anywhere in the camp as it felt safe.  All was good, as long as I was home by 5 o’clock!  There was an old water tower that the we often rode to and explored.

Thursday nights were often a bit rowdy in the camp – certain ethnic groups would gather for a few drinks.

On Saturday nights my family would go to the Club on the army side of the camp after cricket.  I remember sliding up and down the hall in my socks with the other children.

Church was held in a tin shed.  There were a few trees outside the church.  It wasn’t very big.  Pastor Ern Sabel (my uncle) would sometimes come and preach there.’

Kathryn Hentschke is the daughter of Sid Bartsch, head of ALWS from 1965 to 1990. 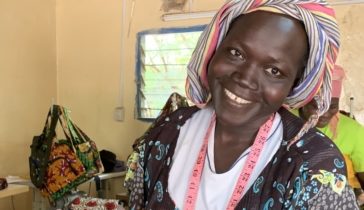 You can help a refugee gain the skills and confidence to become...