‘I was 6 years old when I arrived at Bonegilla with my parents, Kurt and Helga Schmidt nee Bluhm with my 4 yr old sister Renate and my brother Ivar who celebrated his 2nd birthday 6 days after our arrival on 22 December, 1948.  My dad was Estonian and mum Latvian. 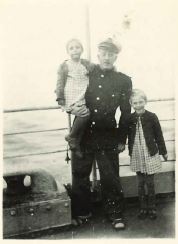 We had left a cold European winter and were about to experience our first hot summer Christmas.  My mum arrived wearing a fur coat!  We arrived on the ship Protea, departing from Genoa, Italy, taking 37 days to arrive in Melbourne.

We then travelled by train to Bonegilla which had been army barracks, surrounded by paddocks.

Our new home! Unlined Nissan huts. I remember the steps going up into the huts.  They were very cold and very hot!

Mum told me that we had some boxes or crates as furniture and room dividers. My sister remembers mum talking of 2 bedrooms and a living area in the timber framed corrugated iron huts (the huts were upgraded later for the 1951 English/Dutch intake) but reading through Wikipedia info, in 1948 there were no divisions in rooms which accommodated 20 people.

Meals were eaten in the mess hall.  It was difficult to get used to the taste of mutton stew.  After a time, mum purchased a primus so she could cook for our family as the camp food was too bland!

There were communal showers, a laundry and the greatest fear of we three children was falling into the long drop toilets and drowning!

There were compulsory English lessons for adults and children.  While the children very quickly learnt to make friends regardless of language barriers, it was more difficult for the adults.  They had seen much that was ugly, were carrying emotional baggage and couldn’t really tell their stories as most people had experiences too difficult to share. 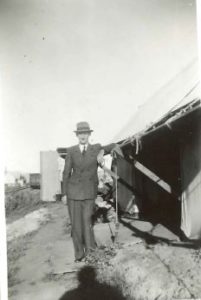 Cultural differences also presented some problems.  If a child was sick and had to be taken to the Albury hospital, a government official (presumably an interpreter) would accompany the child.  If the child was critically ill, then the parents were allowed attendance.  There was not much medical help available at the camp, and when a child was seriously sick, my mother would have to sell things to pay for medicines.

We attended church and cultural groups met socially. For mum, the church was a safe place.  Our mum enjoyed going to the cinema.

Another upside was swimming at the Hume Weir, dancing, freedom and opportunities.  We would play outside.  Some of the men made a rough wooden cart that we would push around or have rides in.  There was a sense of freedom for the children.

In our era, migrants were to be sent wherever designated to work for 2 years.

There is a photo of my dad all dressed up outside his tent when he was working on the railways as a labourer at Wagga Wagga in  ’49.

The photo of my mum Helga in the middle, with her brother Harry and wife Trude on the right (they had arrived from Germany ’50).  They had driven to Bonegilla to welcome Helga’s aunt Toni and husband Alex. 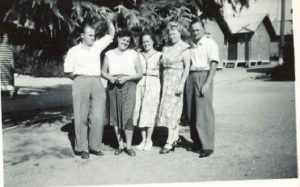 My mum’s twin sister in Germany wrote to say both sisters were pioneers.  Helga coming to a new land, language, food, upside down seasons and culture.

The first town we lived in, my mum would have to point to the food she wanted when she went shopping.  Tante Hilde had to learn to live in a war-devastated Germany.  My mother never returned to Germany until her and her twin sister turned 70!

I am truly thankful for our life in Oz.  While it was hard for our parents, it was easier for us, and our grandchildren are certainly reaping the benefits.

And it all began in Bonegilla and the kindnesses of so many, including Lutheran churches and ALWS.

Over the following years we lived in Lockhart, The Rock, Wagga Wagga and Queanbeyan in NSW, finally settling in the ACT.  While there was racism and sometimes physical attack, I remember the kindnesses of many people.

It wasn’t until we moved to Queanbeyan/Canberra that I realized there were many more like us and that it was okay.

I remember the kindnesses of the Pastor Muetzenfeld in Bonegilla, and the pastors in the towns where we lived.

Because we were Lutheran, we would always seek out the Lutheran churches wherever we moved.  Many people were kind to us as my father was a labourer and we did not have very much. I never had a new piece of clothing until I was in Grade 6!

Life was hard but good.  It allowed me to discover many things about myself and to truly appreciate kindness and be happy to give to others.

My passion for volunteering in many ways and places in my life, is part of my way to pay back all the kindnesses that were shown to us as a family.’

Margrit’s parents Kurt (born in Estonia) and Helga (born in Latvia) met and married in Poznan, Poland where Renate and Margrit were born. Ivar was born in the Latvian Displaced Persons Camp in Germany, Hessenkopf, near Goslar. 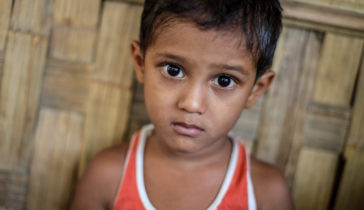 A lungi is a traditional type of skirt worn in Myanmar and...