published in Children • Education • Refugees • The GRACE Project on October 31, 2018

“I came back to school because I want to change my life. I must finish school so I can be independent, and look after my children and my brother.”

Before life was good, but now there is danger.

I did not go to school there because my father refused.

He said that if a girl goes to school she may be told that early marriage is not good, and then he could not have the opportunity to have her married so he could receive his cows as bride price.

So I only went to Grade 1. But my brother is now in Form 1 in secondary school. Two of my sisters died when they were young.

I refused, and ran away.

But the man who I was to marry followed me. He came with a vehicle, and he took me away. He forced me to be with him for two years.

He did not talk to me. I did not love him. He forced me to be there. He would not let me go outside, because he knew I would run away.

At this time I had two children.

My father did not know where I was, but he came looking for me. When he found me, he said to the man, now let’s talk about bride price. The man said he did not love me, and would not take me as his wife.

In our culture, this would be cause for conflict. It would bring in the whole community, and my father did not want this, so he simply brought me back home.

He said ‘I will take her and the children back and look after them, because I am to blame for not letting her go to school.’

During this time, there was conflict. People came to attack, so we all ran away. We all went in different directions. I went with my brother and my two small children. I don’t know what happened to my mother and father.

My brother and I were rescued by Government soldiers.  Now we are here at Kakuma, life is somehow different for us.

What is good is that now we can have education.

This started when the LWF people met with me in the camp. They told me that even though I am a single mother, and have only Grade 1, I should return to school.

They said they will provide the uniform, the text-books, and milk for the children if they must stay with neighbours while I am at school.

They said if you don’t get to school, you will be stuck at home, and your life will go nowhere.

I like school, but I am not happy in this class because I was with the young children, and they shout and fight – they are children. If you tell them to be quiet, they abuse you. You feel ashamed to be with the little children.

In the ALP (Accelerated Learning Program), I am very happy. I am with other learners who are my own age.

I came back to school because I want to change my life.

I must finish school so I can be independent, and look after my children and my brother.

It would be good if I could have a lamp so I can do cooking at night for the children. They are both in school. The lamp means we can also study at night. It would be wonderful to have a book so I could read at night.

I hope I can be an example to other girls who suffered like me.

This is why ALP is so special.

If you share my story, perhaps other girls like me will know there is a way out.” 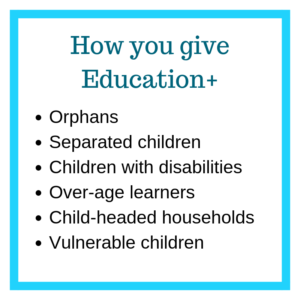 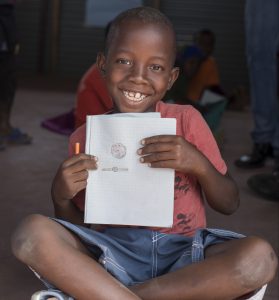 When you’re a child, what’s harder than being a refugee? Being an...