The UN called the Cyclone Idai floods the worst-ever weather disaster in the Southern Hemisphere.

When Cyclone Idai struck in March 2019, Francisco and his family lost everything. Their harvest of sorghum, ground nuts and corn was completely destroyed, and all their livestock were swept away by the floods.

Now, half a year after the natural disaster, Francisco and his community are so grateful for your support which has helped them rebuild their lives. Thank you!

Your help is implemented in Mozambique through ALWS partner, Lutheran World Federation (LWF). An LWF team you support made an assessment visit on 26 – 29 March to hard-hit Manica and Sofala provinces in Mozambique.

LWF’s response will be concentrated in the western province of Manica, where many of the more than 100,000 people affected in that region were still accommodated in temporary shelters including school buildings by the end of March. 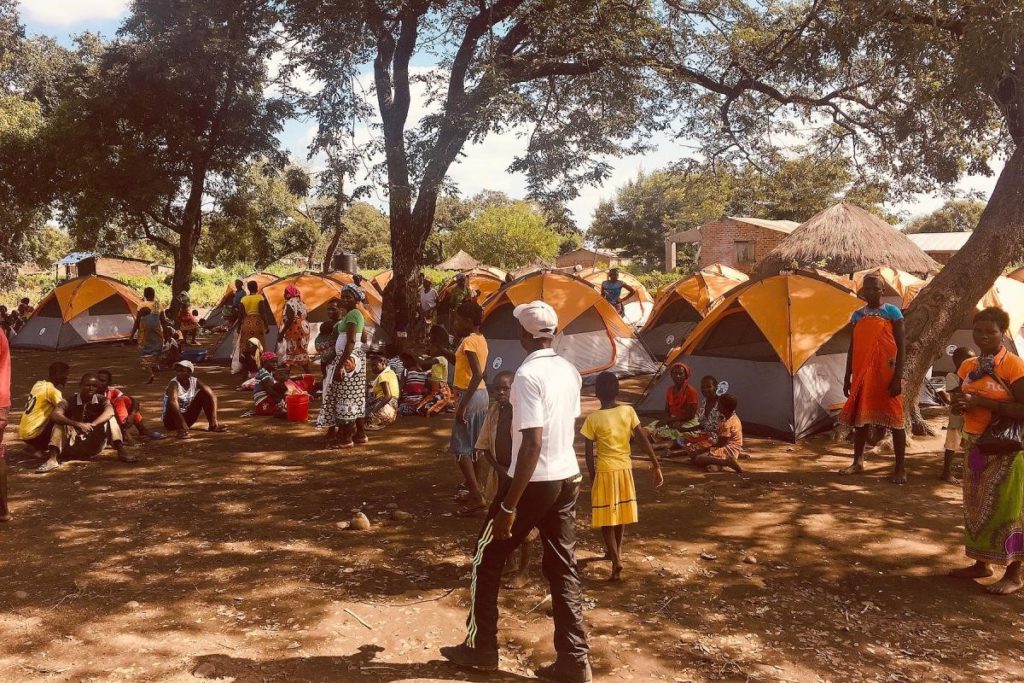 In Manica province, most of the people displaced by Cyclone Idai are staying in holding centres, hoping to return to their homes once flood waters recede. Photo: LWF/Philip Wijmans

“Most displaced people are still in holding centres,
and if food and water could be provided they could
wait for the water to go down and then return home.”

The photos below show you what the LWF assessment team found: 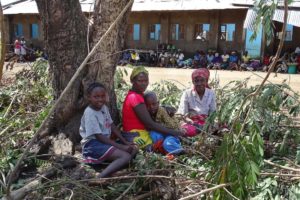 Rita (centre) with her son, Ivo, 5, daughter Beatriz (left), 11, and her neighbour, Catarina (right). They are among people who have sought refuge in a local school after Cyclone Idai destroyed their homes. Photo: Caritas Internationalis 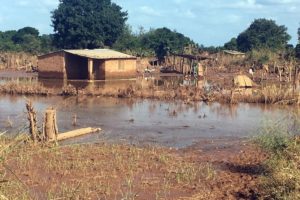 The tropical storm destroyed homes and crops across Mozambique. Emergency food and other assistance is still required until people can begin going back to their houses and farms. Photo: LWF/Philip Wijmans

How your help is delivered

Your help is implemented in Mozambique through ALWS partner, Lutheran World Federation, as part of the united churches response through ACT Alliance in countries affected by Cyclone Idai…

The life-protecting work you support through ALWS

Your action through ALWS supports the following activities of LWF (drawn from the ACT Alliance Appeal documentation), where HH = households (5 – 6 people):

2.3.5   200 water sources are rehabilitated or disinfected

2.3.6   50 water committees are established after water points are rehabilitated

2.3.7   50 latrines are rehabilitated and/or constructed

2.9.5   one meeting to local partners/ national members to strengthen capacities

Grim news continues to emerge from the areas worst hit by floodwaters in the aftermath of Cyclone Idai.

The death toll is expected to exceed 1,000 people, and there are reports of 300–400 bodies alongside a highway in Mozambique. The first cases of cholera have been reported, and conditions are so severe there are fears this could spread quickly.

On your behalf, ALWS has committed $20,000 to the relief effort.

WHERE YOU ARE PLANNED TO HELP

You help in Tete, Chimoio and Buzi in Mozambique, where LWF former Mozambique Country Representative has already arrived.

WHO WILL DELIVER YOUR HELP

FROM THE FRONT LINE

“We have experienced and seen floods over the past years,
but never before anything so destructive as the scale
of what is being experienced now. Both life and property
are being lost almost on a daily basis since the floods started.

We desperately need your urgent support and prayers.”

Lutheran church leaders in Malawi say local churches, mosques and schools are opening their doors to provide shelter for the homeless, after hundreds of thousands of people were affected in the southern deaneries of Lowershire, Blantyre and Zomba.

In Zimbabwe, the Zimbabwe Council of Churches (ZCC) has been monitoring the crisis in the worst affected area of Manicaland province on the border with Mozambique, reporting that mudslides have washed away houses and bridges in the town of Chimanimani.

A ZCC statement said the Salvation Army church in the town was destroyed, with the minister and members of the congregation being offered shelter by the local Roman Catholic church. Injured, traumatized and homeless people are being cared for in churches as there is no access to the local hospital.

The statement says emergency supplies of food, clothing, blankets and tents, as well as medical assistance and clean water supplies are urgently needed, with psycho-social support also required for those worst affected by the disaster.

In Mozambique, there are fears the death toll could go beyond the 1,000 victims predicted by the country’s President. CNN reports the High Commissioner for Mozambique in the UK, Filipe Chidumo, stating:

“… this is a big tragedy of biblical proportions”.

Aid workers fear the spread of disease due to lack of sanitation, and severely crowded conditions in shelters for the homeless. Graca Machel, Mozambique’s former first lady, said in an interview with newspaper Verdade that Beira, the city 90% destroyed:

“…will go down in history as having been the first city
to be completely devastated by climate change.”

As LWF works on emergency response, General Secretary Rev. Dr Martin Junge sent a message to the heads of the Lutheran Churches in Mozambique, Malawi and Zimbabwe:

“With pain we have received the news of massive destruction,
injuries and death caused by Tropical Cyclone Idai.
Please be assured of our prayers surrounding you
in these moments of pain and distress.

We pray for the safety of those affected,
for those who had to flee their homes,
those faced with uncertainty, those who are injured
and for those who grieve lost ones.”

ALWS has joined other leading Australian aid agencies in solidarity to advocate to the Australian Government for a compassionate response to this disaster, even as we mobilise our own response to the disaster. Read letter here

ALWS action is coordinated with LWF and the ACT Alliance of churches of many denominations from around the world. Your support is welcomed.

ALWS has committed $20,000 to immediate disaster response
for where it is most needed in flood-hit southern Africa.

The ALWS Emergency Action team is co-ordinating with:

While it is too early yet to outline exact action, our ALWS experience teaches us people are likely to need:

Already we know that children, the elderly, those who are sick or have a disability, and pregnant and lactating mothers are in the greatest danger. 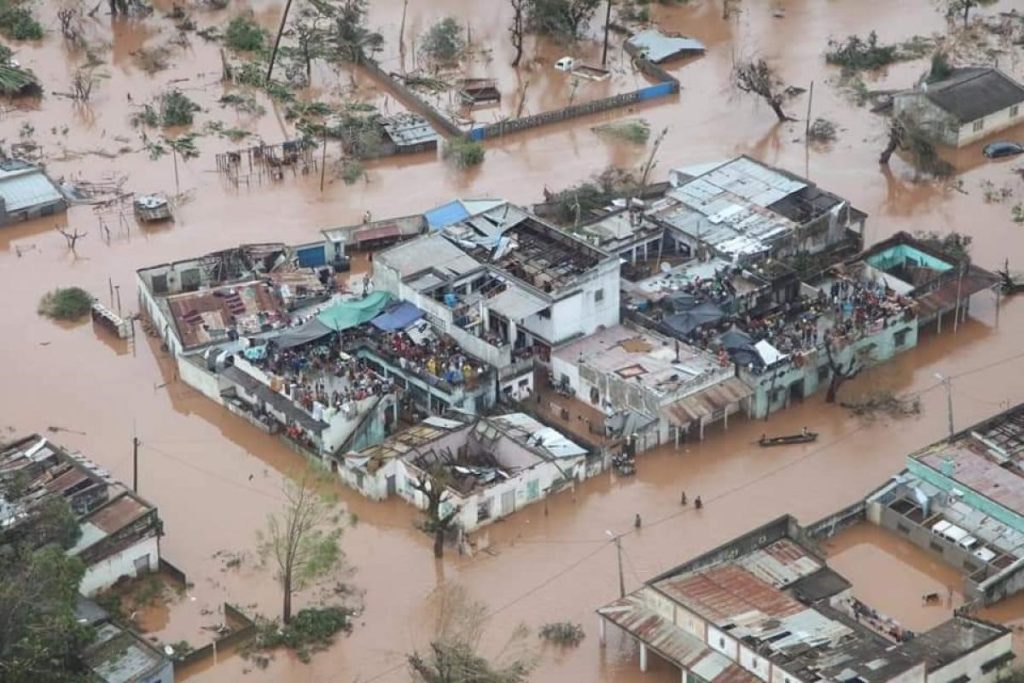 Cyclone Idai made landfall near the port city of Beira in Sofala province of Mozambique on Thursday 14 March 2019 with winds of up to 177 km/h.

Heavy rains caused by the cyclone hit the central and northern regions of Mozambique, leading to massive floods and leaving at least 202 people dead, according to the President of Mozambique, Filipe Nyusi. The death toll is expected to rise.

The situation is likely to deteriorate and the number of people affected is likely to increase, as weather experts predict heavy rainfall in Sofala and Manica provinces from 19 to 21 March. Flood waters may rise up to around eight metres and at least 350,000 people are at risk (OCHA Flash Update, 19 March).

There are also growing concerns regarding the potential effects of the overflow of the Marowanyati Dam in Zimbabwe on water levels in Mozambique.

On the morning of Friday the 15 March 2019, the province of Manicaland in Zimbabwe was hit by Cyclone Idai, causing massive floods that destroyed houses, swept away fields, uprooted trees, and demolished bridges. The government reported that 98 people have been killed and more than 200 missing.

Further flood impacts may be felt in Malawi and Madagascar.

WHERE HELP IS NEEDED MOST

Moreover, 286 classrooms have been total destroyed forcing more 2,450 children out of schools. The damage to agricultural lands is also very significant, with at least 83,813 hectares of crops such as maize, cassava, sorghum and millets flooded, affecting 53,318 small farmers whose livelihoods depends on farm produce.

In Zimbabwe, at least 20,000 houses have been partially damaged in the south-eastern town of Chipinge, while 600 others were totally destroyed. The Government is struggling to cope with the huge influx of affected households as the country reels from economic problems. The affected households are now sheltered in churches and temporary structures set up by UN agencies. Several aid agencies are assisting government efforts in the search and rescue operations and in the distribution of food aid.

HOW YOUR DONATION IS USED

Your donation will be used where it is needed most to respond to the flood disaster in southern Africa following Cyclone Idai. ALWS has committed $20,000 to the response. Any donations above what is needed for this appeal will be used to support disaster-risk reduction programs in other in-danger countries. Information in this communication is based on data correct at time of writing, and may change.

When refugees arrive at Kakuma in Kenya, they are tired, hungry and scared....