Mr Soth had been growing vegetables with traditional farming methods, but was challenged with small yields, insects destroying his crops, and plants not growing to full size. He was unable to provide enough to eat for his family of four.

In May 2017, Mr Soth went with LWD and other local farmers to visit successful farms in another province where he learnt about new farming techniques and how to apply them.

After returning home, the group of farmers used start up funds from LWD (around $270) and their own pooled savings (around $325) to buy plastic, tubes, fertiliser and seeds. They group continued to meet every week to share what they were learning.

In mid-August, Mr Soth planted his first cucumbers, applying his newly-learned skills – and by mid-September, the first harvest of 7kg of cucumbers were ready. The yield continued to increase and a month later, Mr Soth gathered 140kg of cucumbers in just one week. The whole year’s yield was double the size of previous years.

Mr Soth says he and his wife have felt happy since he grew his first cucumber with the new techniques. Previously, he’d had to do odd jobs around the village to make enough to support his family. At night, he’d always worry about money for the next day. Sometimes, there were no jobs to do, so there was no income.

Now, they are confident in earning a regular income. My Soth says, “If our farming business continues, our living condition will get better and better. I would like to express thanks for supporting my family.” 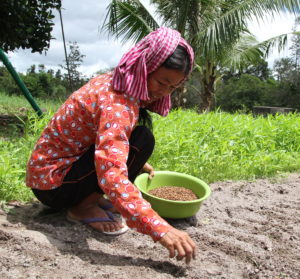 We all know vegetables are good for you. Yet in a country...