The article below celebrates 70 years of care from people like you through ALWS, and appeared in Albury newspaper The Border Mail on October 14 2020.

One pastor’s wish to help post-war migrants at Bonegilla has grown into an overseas aid agency that supported nearly 300,000 people last year.

Australian Lutheran World Service, based in Albury, marked its 70th anniversary on Wednesday with a cake cutting ceremony, far smaller than the celebrations originally scheduled for this weekend.

But while the COVID-19 pandemic halted those plans and continues to challenge the service’s work, staff and volunteers remain proud of its history and positive about the future.

When the Bonegilla centre closed in 1971, the agency office moved to Albury and began to focus more on overseas aid and development.

“I think he was my mum’s pin-up boy,” she laughed. “He was a gem and the gentlemen who have followed him have been likewise.”

Today ALWS comprises 21 staff members, about half in Albury-Wodonga and others in Melbourne, Sydney, Brisbane and Adelaide. The longest-serving employee, Jenny Monte, began in 1988.

“There’s hundreds of thousands of people fleeing right now,” she said. “For people who live in places that are prone to disaster, part of what we do is help them not only recover from the last but be more ready for the next. “It’s about bringing hope, amplifying voice and creating more abundant life for people who are forgotten.”

ALWS receives some federal government funding but about two-thirds of its income comes from donations, which totalled more than $4.2 million last year.

“We think that’s just in terms of being accountable to the people that have entrusted us to pass on their generosity overseas,” she said.

Gary Simpson, who was executive secretary between 1991 and 2000, said involving students in activities had both broadened their education and developed the service.

“Since the schools have come on board, that’s rejuvenated the whole process, which is great to see because that’s our future coming through,” he said.

Originally a Walk My Way 26 kilometre walkathon from Victory Lutheran College to Bonegilla Migrant Centre had been planned this weekend to raise money for refugee children’s schooling.

Other activities would have included tours of Bonegilla Migrant Centre and thanksgiving services at Border Lutheran churches with visitors from across Australia.

Congregations around Australia and New Zealand will still acknowledge the service’s anniversary on Sunday. Ms Davies said ALWS remained connected to the Albury-Wodonga community, even though 70 years had brought many other changes.

“There’s just a real sense of solidarity,” she said.

“This is our heart and soul.” 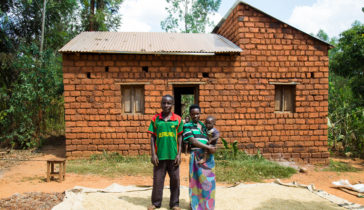 You supply sheet metal for the roof, plus nails and poles to...